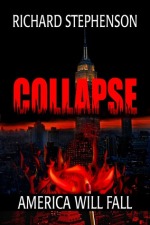 ‘Collapse’ by Richard Stephenson is book one in the ‘New America’ series and I believe Stephenson’s first novel. The novel is set in the year 2027, with the USA falling apart. It is in the grip of the 2nd Great Depression and is at war with the Great Empire of Iran. The state of Florida has been devastated by a hurricane that has left over 1 million people dead and Texas is about to face the same fate. The government is about to fall. The people are descending into anarchy. What will become of the USA?

Though a first novel, the suspense and action of the novel is first rate. It is very easy to read and carries you along quite easily. However, there are serious issues with the grammar and spelling, as well as some fairly obvious errors in the actual text of the story. A good proof reader should have picked up on these mistakes and that would have resulted in a far more polished and professional  product.

There is also a short sex scene tacked onto the end of the story which I thought was somewhat tacky and unnecessary. It did nothing for the story as a whole and was completely out of place in the overall development of the novel.

If you can see past these obvious flaws without too much prejudice, the novel is a very good read and I do look forward to picking up the story when the next book in the series is released in 2013.

I have just finished watching the mini series ‘John Adams,’ starring Paul Giamatti as John Adams and Laura Linney as Abigail Adams. I found the mini series to be difficult to watch, as it was hardly brilliant drama despite the rhetoric on the DVD case. Not being American was perhaps a reason for my lack of enthusiasm for the mini series. I found it to be a disappointment as a viewing spectacle. But how true to the man and to history was the mini series? This is a question that now has my attention – for the portrayal of John Adams in the production was hardly that of a man to be admired.

Adams comes across as a self-centred, vain glorious man, with poor people skills and a terrible father and husband. He appears to seek his own advancement to the expense of those about him and also to be full of envy and petty jealousy. He also appears to be a somewhat poor diplomat and politician overall – even though he held the greatest office in the United States, as second president following that of George Washington.

So now I come to the book on which this mini series was based, ‘John Adams,’ by David McCullough. I am now going to read this book and see just how true to the book and actual events the mini series achieved. I find it difficult to believe that Adams could have been the way he was protrayed in the film – now I will seek out the truth for myself.

Today’s suggestion is about honouring a tree/s. This one is a little too much like tree worship for my liking, though the idea of preserving trees and planting more – greening the world – is an idea I greatly support.

The actual idea is about dressing up a tree with various decorations and the like in order to honour a tree.

A response to reading ‘365 Ways to Change the World,’ by Michael Norton

The suggestion for today is about working to improve access for disabled people to facilities and services that other people have access to. This is a great cause and is one I support – though I don’t participate in the actual group being promoted in the book. I certainly don’t have any problem with the group being promoted, but do believe in improving access for disabled people.

A response to reading ‘365 Ways to Change the World,’ by Michael Norton

I have now started to read ‘Calvin for Armchair Theologians,’ by Christopher Elwood. I have to admit that I come to this book with a very doubtful attitude. The front cover illustration of John Calvin and the many ‘comic-like’ illustrations throughout the book worry me. I just don’t get a sense that this book is a serious treatment of John Calvin. That is the impression that presents when just looking at the book – I hope to be proven wrong for having ‘judged a book by its cover.’ The illustrations in the book are by Ron Hill, who is apparently a freelance illustrator and cartoonist.

I have to admit that the ‘armchair theologian’ part of the title also gives me a poor impression of the book – it sort of gives me the picture of a guy who loves to watch sport on the TV while sitting in his armchair, while not really taking the sport seriously in his actual life – has nothing to do with it in reality, in that he doesn’t play sport. This is the idea that ‘armchair theologian’ paints for me, which is an approach to theology that is far removed from the Bible’s idea of involvement with the truth.

But, as I said, I hope to be proven wrong for having ‘judged a book by its cover.’

I have this morning become a book reviewer for Thomas Nelson. This will involve me reading and reviewing books that Thomas Nelson send to me. It is an unpaid job, but I do get to keep the books I review. I guess this could be a good and/or bad thing, depending on the individual book I read and review.

Being a part of this program will allow me to keep current on trends in Christianity – at least to some degree, as I read and review the books that are sent to me. It will also save me money as I don’t have to pay for the actual books that are sent to me. So the library will continue to grow and my reading will span the length and breadth of the current ‘Christian’ scene.

I will be posting reviews of the books I read and review for Thomas Nelson here, so readers of this Blog will be able to ‘experience’ the journey with me. They will also be posted on commercial book selling sites.

My reviews, will of course, be from my Particular Baptist perspective – which I guess will be somewhat novel for a Thomas Nelson book reviewer.